The Gloucestershire Historic Churches Trust (GHCT) are pleased to be celebrating the first 40 years of the Trust in 2021!  Over this time, we have made grants worth over £2m for renovations and improvements to local churches.  This has been a significant contribution to helping historic churches – our living heritage in Gloucestershire and North Bristol.

In this article, the chair of our Grants Committee, Jonathan MacKechnie-Jarvis recounts some of that history along with some fascinating anecdotes.

We should start by raising a toast to some of the founding fathers.  Best known, perhaps, was David Verey, of Barnsley House.    As Chairman of the Gloucester Diocesan Advisory Committee, he knew at first hand the need for constant and timely repair of church buildings.   And having edited the first Gloucestershire Pevsner volumes, he knew all the county’s churches and chapels – and not just the Anglican ones.

John Cannan, churchwarden of Beverston, was a stalwart of the Trust for the first twenty years and was chairman of the Grants Committee for most of that time.   Sir Antony Bonham of Ampney Crucis – another churchwarden –  was our first chairman, and a great ambassador for the Trust in its early years.

We had a lot of help and support both from Bishop John Yates for the Church of England, and from the county Lieutenancy.   Sir Martin (or ‘Tim’) Gibbs hosted the garden party at which the Trust was launched, and his successors as Lords Lieutenant have always been incredibly supportive.

The inaugural garden party, followed by a special service at Cirencester Parish Church, was quite an event.  One person who remembers it well is Michael Hare, that inveterate scholar of the Anglo-Saxon period, and of Deerhurst church.  He and his mother were both invited, and he was acting as chauffeur.  As a cricket fan, Michael was far more interested in the gripping events two hundred miles away at Headingley.  How many other guests had to be almost forcibly removed from their TV set, as Bob Willis made immortal Test Match history?   “Blow Royalty” (Michael’s words may have been a touch stronger) “this is IMPORTANT!”

As it happens, he did see the closing overs, AND they made it to Kemble in time to meet Prince and Princess Michael of Kent.  Not only that, but like any good academic, he can produce the evidence – here is his invitation card to prove it. 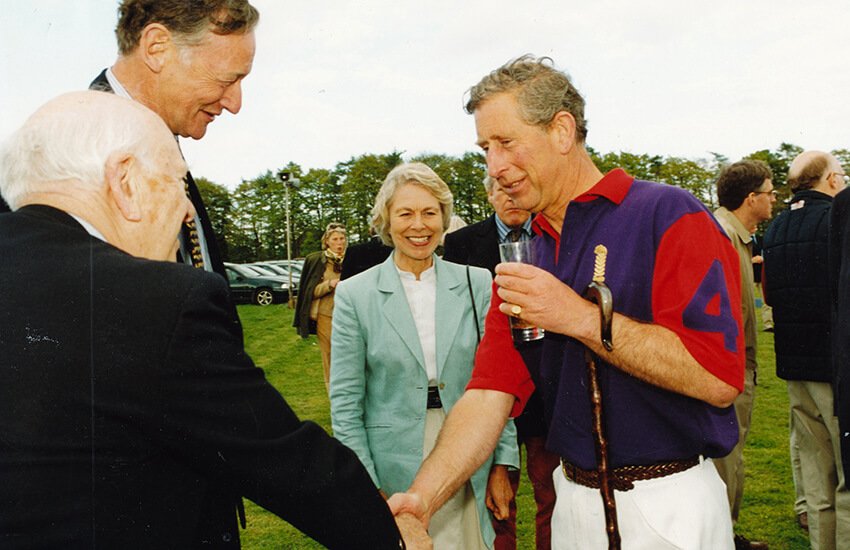 From First Grants to £1m in Capital

The Trust got off to a good start and within a year was giving away money, albeit on a limited scale to start with.  In 1982 the grants awarded were £7200.  Not a lot compared with our present annual grants budget of £150,000, but manna from heaven to the churches concerned.  Grants were small (usually a few hundred pounds), and strictly for essential repairs only.  Not even bells or organs, let alone loos and kitchens!

The story was one of steady growth of capital funds and grants expenditure.   The Trust was quick off the mark with the annual Bike Ride, or ‘Ride+Stride’ as we now call it.  The very first ride was organised by the Suffolk Churches Trust in 1982.  We got our first ride off the ground the following year, raising a creditable £14k.

Jamie Eykyn took over as Chairman in 1994 and soon set a target of increasing the capital to at least £1m by 2000.   To a large extent this involved ambitious social events, priced to raise serious money … and the target was duly achieved.

The events included a Sale of Treasures, and numerous high-profile concerts such as opera at Longborough.  Perhaps most remarkable was a ten-year sequence of sponsored Polo matches.   One day the full story of these matches deserves to be told.  They were the result of Jamie Eykyn’s considerable connections, coupled with some decisive action, and a fair dash of luck.   It should also be put on record that the personal interest of our Patron, the Prince of Wales, was of the greatest value.

The first match, in 1996, with the Prince himself playing, was in the presence of the Sultan of Brunei, who made a generous personal contribution.  This was surely a remarkably gracious gesture from the Head of State of a Muslim country!     All good things come to an end however, and the day came when the Prince of Wales had given up as an active participant, and his sons too were by then pursuing their Army careers.

The Importance of Legacies

Jamie was keen always to stress the need for legacies, whenever he spoke at Trust events.  He recalls a certain amount of leg-pulling from Council members but was not to be deflected from such a key message. Of course, with a legacy, one seldom knows when, if ever, the message will bear fruit.  Certainly, it was some while after he stepped down that we had news of the bequest from Mr Edward Phillips, from South Wales, which was by far the biggest legacy we have ever had.  This amounted to very nearly £200k and was a very welcome addition to our capital.

In two important ways the scope of our grant-making has increased since the early days.  As was mentioned above, the grants were restricted at first to fabric repair.   That changed in 1995, thanks to a partnership with the Summerfield Trust.  They helped with a capital lump sum and subsequent revenue grants, and a Special Fund was established.  The idea of this was to enable the additional grants budget to be spent on improvements and community facilities in churches.  At about the same time, the Trust’s title was changed to omit the word “Preservation”.

Not only scope of the grants, but also territory.   In 1996, the short-lived county of Avon became the unitary authority of South Gloucestershire, and grants were soon being made to churches in that area – some of the Anglican ones being in the Diocese of Bristol.    Several years later it was suggested by the then Grants Chairman, Ben Woods, that we should extend our area to include North Bristol, bearing in mind that this was not covered by any county churches trust.  (South Bristol churches can apply to Somerset HCT).

This was made possible by a Charity Commission scheme of 2006, which also merged with the Trust the previously separate Special Fund.  So, we could now make grants for almost any church-based project, anywhere from the north bank of the Avon in Bristol City to Mickleton, sixty-five miles away at the furthest tip of Gloucestershire.

Looking to the Future

It is salutary to remember that the Trust was born in an era when daisywheel and golf-ball typewriters were the latest thing.  We do not claim to have led the world with our IT skills, but we now have a website to be proud of, and a much-streamlined digital set-up for things like Ride+Stride.

What we have always tried to do above all is to minimise our running costs (almost everything is volunteer-driven), and to offer a simple and user-friendly service to the churches we serve.

Here is to our next forty years!

Jonathan MacKechnie-Jarvis
Chair of the Grants Committee and Trustee, GHCT

We have extremely limited records from our genesis and early years. There is no trace of the correspondence and the Council minutes from that time and we have not got an Annual Report before 1987. If anyone out there has any early paperwork which we could scan for posterity, we would be glad to hear from you.
Get in touch
← Previous Article Next Article →
This website uses cookies to improve your experience. We'll assume you're ok with this, but you can opt-out if you wish. Cookie settingsACCEPT
Privacy & Cookies Policy